By Micheline Jenner on December 3, 2012 in Announcements, CWR News

Read the account of the first breaths of a new-born humpback whale calf witnessed by Curt and Micheline Jenner at Tantabiddi, Exmouth on July 19, 2009. Humpback cow lifting her new born calf to the surface to take its first breath of life.
Photo credit M.Jenner

Centre for Whale Research scientists Curt and Micheline Jenner were in for a non-typical “day at the office” last week as they finished a survey and headed into the Tantabiddi entrance to Ningaloo Reef, Western Australia. “We had sighted a large single humpback in the passage and had slowed down to collect photo-identification images of it, noting that it was quite large and possibly a pregnant female” said Curt.

“This in itself was not unusual as pregnant females heading north along the reef at this time of year are commonly sighted as they head for the Kimberley calving grounds some over 1000 km to the north to give birth. As Micheline began the process of photographing left and right side of the whale and its tail fluke for the identification catalogue she noticed that, contrary to what we had originally thought, there was a calf with the mother whale. These photos later revealed a large amount of blood in the water – a sure sign of a typical mammalian birth.”

As they watched, it was apparent that the calf was struggling to stay at the surface to breathe and was swimming around in tight, clock-wise circles with only the tip of its snout protruding. “It was amazing as we saw the cow dive below the surface, only to reappear underneath the calf, lifting it completely clear of the water on her upper jaw. The cow held the calf gently in this position for about 10 seconds while it took what we now understand to be its first breath of life”, Micheline enthused.

“This breath indeed filled the calf with life and as soon as the cow lowered its newborn back into the water, its little tail flukes began to beat like a wind-up toy being lowered into the bath. Before the cow could intervene the calf headed straight over to the WhaleSong II for a close swim past, much to the amazement and delight of the scientists aboard.” “It was surprising to see how small and skinny the little whale looked”, recalls Curt, “We know that humpback whale calves are born almost blubberless, but until you see the little fellows, it’s hard to understand how vulnerable they actually are in their harsh environment.”

Most humpback whale calves in the Western Australian population are thought to be born in the warm waters of the Kimberley near Camden Sound. At this time of year, and into August, the water temperatures are typically 4-5 degrees warmer that what is found at Ningaloo. Scientists agree that this temperature may make quite a difference to energy requirements for new borns and in some cases, may even make a difference to their survival.

So why would a pregnant female give birth to her calf in such relatively cold water? Was she too young a mother to know where to go to find warmer water? Did she leave her departure from the feeding grounds too late and simply run out of time to get all the way up the coast? Or are there some activities that humans are doing that disturbed her progress up the coast? These are the types of questions that keep the team at the Centre for Whale Research very busy with not only humpback whales, but blue whale, sperm whales and the numerous other whale and dolphin species that populate our pristine coastline.

That day watching a calf being born was a special treat for the researchers and a “holy grail” for whale science as the birthing process has only rarely been witnessed and described. “We feel awed and privileged to have finally seen this spectacle after over 20 years of research”, says Curt,” we just hope that human activities haven’t precipitated a premature birth and that this little whale that we’ve named Tantabiddi has a long and fruitful life.” 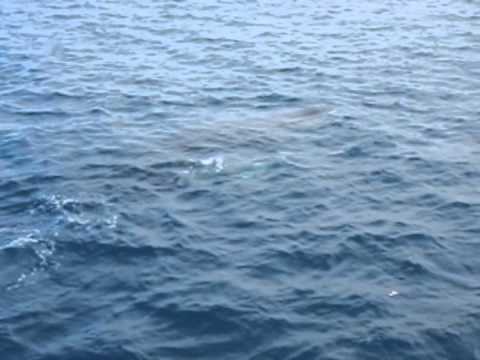 The Long Way Home – Malta to Fremantle: Part 2
Gizmo – defies the odds and survives a net-entanglement